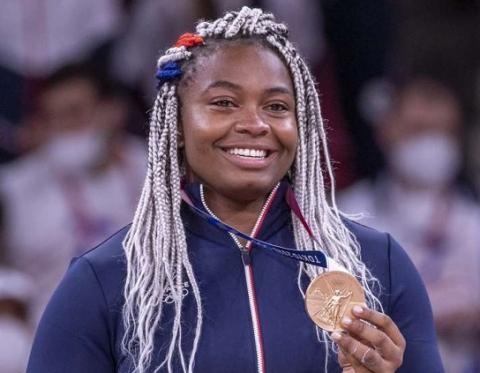 Not all of them brought home medals, but each and every Sorbonne University student who competed at the recent Tokyo Games (all first-time Olympians) certainly shone. Let's take a look at their achievements.

At just 21 years of age, Romane Dicko can be proud to add two Olympic medals to her already-decorated name for the first games of her career. First, the bronze in the women's 78kg competition, in which she came up against the European champion, Kayra Sayit. Then, gold in the mixed team competition, alogside multiple world champion Teddy Riner, the freshly crowned Clarisse Agbegnenou and the talented Axel Clerget and Sarah-Léonie Cysique. The French team defeated the Japanese, who were favorites heading into the event, by a score of 4-1.

Very comfortable in the semi-finals of the 110-meter hurdles, Aurel Manga equaled his personal best (13.24) and earned his place in the finals with his compatriot Pascal Martinot-Lagarde. Rarely have there been two Frenchmen among the eight finalists in the 110-meter hurdles! With a final time of 13.38, Aurel Manga couldn't quite surpass eventual winner Jamaican Hansle Parchment, finishing in eighth place.

For their very first participation in the Olympic Games, Charlotte and Laura Tremble certainly didn't disappoint! Finishing eighth in the technical program with 87.3474 points, the two sisters improved their score by more than a point.
In the final Duet Free event, they came in eighth place and scored well (89.6333 points) with their rhythmic choreography on the theme of the Amazonians. Their final score (176.9807) didn't quite push them high enough to change that 8th place ranking.

Unfortunately, our two Sorbonne University students didn't hit the bullseye in the Archery competition. Lisa Barbelin was eliminated in the 8-person finals by Mexican Alejandra Valencia.
Thomas Chirault didn't make it past the 32-round final in the individual event after having won the first two rounds of his event against Dutchman Gijs Broeksma.

The very young Lucile Tessariol and her team (Charlotte Bonnet, Assia Touati and Margaux Fabre) finished eighth in the final of the 4x200 m freestyle with a time of 7.58'.15.
In the men's event, Jonathan Atsu failed to qualify after his individual heat. In the team event, he and his teammates Jordan Pothain, Hadrien Salvan and Enzo Tesic finished sixth in the first heat of the 4x200m freestyle relay with a time of 7.08.88.

Badminton : Delphine Delrue out before the quarterfinals

The quarterfinals were held without any French badminton players this Olympics. After having beaten the mixed duo of Canadians in two sets and 33 minutes, Delphine Delrue and her teammate Thom Gicquel were unable to repeat their run against the British team in their third and final group match.

Well done to all of our amazing student athletes who competed at this year's Olympic Games. Next stop: Paris 2024!