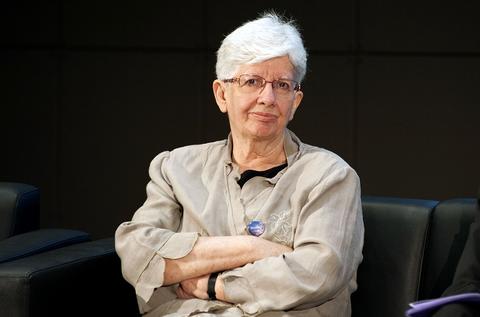 Humanity cannot deprive itself of half of its intelligence.

Nicole El Karoui, Professor Emeritus in Applied Mathematics, was named Officer of the Legion of Honour and this year celebrated her 3x25th birthday at Sorbonne University. A pioneer in financial mathematics, she is studying the need to bring women scientists out of the shadows.

24% of university professors and 6% of presidents of public research organisations are women. What is your reaction to these figures and how do you propose changing things?

Nicole El Karoui : There is a major need for women in science and particularly in mathematics research, over 85% of which is male. Humanity cannot deprive itself of half of its intelligence. Having had the chance to co-author my thesis with two boys, I know to what extent the diversity of our viewpoints, the comparison of our differences and the complementarity of our personalities make up our strength.
I therefore believe it is essential to get men and women working together in science. We could, for example, ensure that funding contracts for research are only awarded when they are held by both a woman and a man.

We must also look at what happens at the top of the hierarchy, at the level of those who hold the power, which is where the gap is widening. That is why it is essential for women scientists to come out of the shadows and take up positions of responsibility. In discussions with corporate HR managers, several told me that when gender parity was imposed on boards of directors, it quickly became a modus operandi, a standard for the whole company. I feel we should follow this model in the laboratories.

Why do you think it is so important to educate women in mathematics?

N. E. K. : With the explosion of big data, we are now experiencing a situation similar to what happened in the 1980s with finance. A new field is being created, and with it, infinite job opportunities. Women need to take advantage of this, and girls at high school need to realise that in the next ten years, they will have a chance to be recruited into these new professions, including positions of responsibility. Those who do lack data culture may be penalised, which is why it is important that all of them acquire a basic scientific background.

They therefore need a taste for math from an early age. I am a great believer in passing on our passions and find it very interesting that in some schools mathematicians work with teachers to demystify this discipline, stimulate the quickest pupils and support the weakest.

What made you want to turn to mathematics and probability?

N. E. K. : I was first and foremost a literary woman. I spoke French, Latin and Greek, like all the good students at the time. It wasn't until high school that I was able to take advanced mathematics. After a long hesitation with philosophy, I finally enrolled in pre-science.
That's when I really discovered the pleasure of doing math, like a pianist who, after years of playing scales, plays a first piece. I became aware that mathematical abstraction allowed me to free myself from the real and to get closer to areas that have nothing to do with it. It was also in higher maths that I first shared the classroom benches with boys.

I then fell in love with probability at the Ecole Normale Supérieure. Doing math calcualtions on chance seemed crazy to me. I liked the idea of mixing the power of mathematical demonstration with the uncertainty of randomness.

You're a renowned mathematician, but you're also the mother of five children. How have you managed to reconcile wearing these two hats on a daily basis?

N. E. K. : I didn't see myself doing only mathematics in my life. In fact, I had my first two children during my thesis. It wasn't always easy, especially when I was spending months battling with a mathematical question and had to continue to deal with everyday life. But having five children has allowed me to keep my feet on the ground, refocus my priorities and quickly learn to sort out what's important.
In the lab, I was fortunate not to be the only woman. Many of us managed to make small things happen, such as timing team meetings to be able to pick up the children.

Nearly 30 years ago, you created the Probability and Finance master's degree that bears your name. Can you tell us the story of this flagship of Sorbonne University program?

N. E. K. : The first courses in financial mathematics were almost all taken by women. At the time, many mathematicians took a dim view of the world of finance and relegated probability to the status of simple applications with no scientific value. This meant that as women, we were free to work in this field. I was in the right place at the right time.

In the 1980s, the financial markets had just been created in France. We were living in a period that resembled those of today's startups. The first PCs were appearing, we were in the midst of an IT revolution and new ideas were emerging in finance. They needed mathematicians to describe the random movements of the markets.

Alongside other women, I was conducting research on stochastic optimisation at Jussieu's probability lab. In other words, we were trying to model randomness by creating real probabilistic tools, and our mathematical culture was very close to what the markets needed. I decided to take a semester's sabbatical at a bank, where I met traders and interest rate and debt specialists, after which I returned to university to do a master's degree, like several mathematicians in other institutions, which brought together the world of probability and the world of finance.

As a mathematician, you are an example to many young women. Why do you think it's important to have female role models in science?

N. E. K. : Women must be put to the forefront, speak out in universities, in the media, everywhere, so that girls have models of success to look up to, which is the way to deconstruct stereotypes and preconceived ideas. And there is much work to be done! In prep school, I remember that even though we were in the top ten in math, the boys were always trying to explain to us that girls couldn't be good at math! Attitudes are slowly changing, but you can't let your guard down.