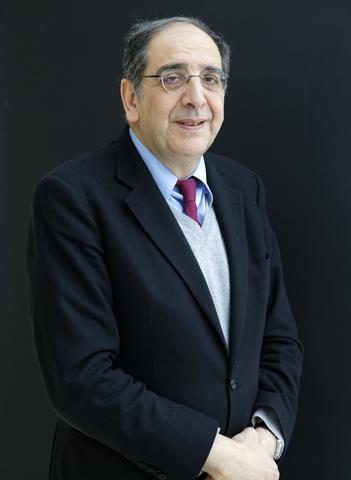 Head of department at the Quinze-Vingts Hospital and professor at Sorbonne University, this visionary ophthalmologist celebrates the tenth anniversary of the prestigious Vision Institute he founded in 2009 to fight against retinal diseases.

An antique microscope is the only ornament, a worktable, a library with opaque glass, Professor José-Alain Sahel’s office is like its occupant—imbues with a sobriety that makes the essential visible. At 64 years-old, the director of the Vision Institute has a shy smile and a confident turn of phrase. At the head of one of the best ophthalmology centres in the world, he set up shop on the third floor of 17 rue Moreau in the 12th arrondissement of Paris, in direct contact with patients and researchers. "There is no entry door code between the institute's laboratories. Once you've entered, you're at home everywhere," says the director, opening the blinds with a benevolent look. This concern for fluidity and transparency is reflected in the building's facade, whose varying glass textures allow blind people to find the entrance.

It’s already been ten years since José-Alain Sahel, surrounded by early believers, succeeded in achieving his vision: to create a structure that integrates research, innovation and technological development and solutions for patients into the hospital. It was a crazy gamble that might never have seen the light of day, as neurobiologist Serge Picaud, deputy director of the Vision Institute, recalls: "It was nonsensical on the part of José Sahel, and all of us at his side, to believe that it would be possible to build such an institute. At the time, public-private partnerships did not yet exist at the hospital. And we were only a very small team from Strasbourg with very little money. José's ambition to develop large-scale projects such as retinal prostheses seemed totally unrealistic to me at the time. But he had the madness to follow his dreams.”

Dreams from more than thirty years ago, in a basement of Strasbourg University where the young researcher, who had just returned from the United States after a postdoc at Harvard, had taken root. Little by little, others joined him, like Serge Picaud in 1995, and with them, he set up a laboratory in the disused pet shop they had been assigned. "Doctoral schools didn't even want to fund students in such a shabby lab," recalls José-Alain Sahel. Ten years later, in 2005, by then professor of ophthalmology in Paris, he showed the same stubbornness in the face of the opinion of the Court of Auditors, which described his project as "pharaonic, empty and lacking international scope". 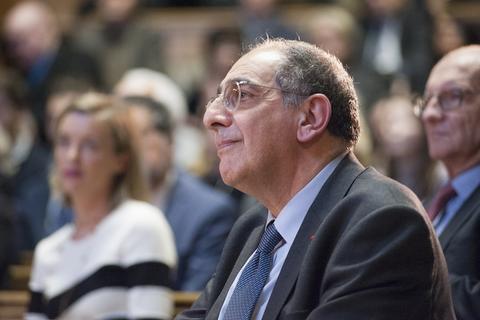 He certainly owes this tenacity in the face of adversity to his education. Born in Algeria in 1955, José-Alain Sahel spent his early years near Oran. His mother was a schoolteacher, as was his father, who later became an inspector. His parents were demanding and instilled humanist values and a sense of the general interest in him. "My father came from a poor family where there was nothing but work," he explains. Then, he recounts how, in the middle of the winter of 1961, he found himself with his family in the square of an unknown town, after a hasty departure from Algeria where his father had been threatened with death by the OAS because of his loyalty to the Republic: "The day after we arrived in Rodez, my parents took us to school, as if nothing had happened. There was no question," says the professor, who even today still can't stand people dwelling on problems rather than solutions.  .

From the moment we choose to do this job, the patient's problem becomes our problem. We're committed.

At school, he excels in all subjects. Naturally gifted in mathematics and physics, his teachers guide him towards the best scientific courses. But the brilliant high school student, who loves poetry and philosophy, is seeking a job that will allow him to combine people and science. He believes he can find this balance with medicine. Ten years of studies he hates, lamenting the "head stuffing" and courses that offered only "closed knowledge and cooking recipes". One particular event quickly makes him forget this period. While still an outpatient at the Saint-Louis Hospital, he witnessed the discovery of a new protocol that allowed children with leukaemia to avoid certain death. "That's what I wanted to do: to search for a way to avoid resigning oneself to the disease," says the director with all the enthusiasm of the first days. From the moment we choose to do this job," he adds, "the patient's problem becomes our problem. We're committed. You're doomed to hope.”

He then makes incurable and blinding illnesses his fight. A fight that he led in ophthalmology, a specialty that offered new therapeutic hopes,which he entered for the beauty of the eye one on hand and a career on the other. He, who refused to bow to the rehashing of preparation for the internship, first gets a place in radiology, which he gives up in favour of one of his friends who is ranked behind him. She really wanted to become a radiologist; I didn't know yet," confesses the practitioner with humility, "so when I discovered the practice of ophthalmology, I chose to take an interest in vision.”

From then on, José-Alain Sahel would articulate disciplines at the service of the patient, from the molecule to the behaviour and from the gene to the experience of daily life. The strength of José Sahel," emphasises Serge Picaud, "is that he succeeds in perceiving the skills that need to be aggregated to translate a human question into multiple scientific questions. There is no good applied research without good basic research. " The very structure of the Vision Institute reflects this inter-disciplinary approach. The architecture is designed to avoid compartmentalising knowledge and to promote synergies. Our role is to create a space of freedom and desire where people want to do things together," explains the professor. What each person could not do alone becomes possible here with others. It's a puzzle: each piece has no value in itself, everyone is needed. That's what makes us strong. This is the synergy sought by the leading international scientists who come to the Vision Institute by the dozen. And this same strength undoubtedly explains the centre’s resounding success. "The difference between success and failure? It's another 15 minutes," smiles the professor. When others stop, I'll try again. To try new experiences, to fail, to learn from failure and to start again, this is José-Alain Sahel's leitmotiv. A pragmatic philosophy that he nourishes daily by confronting reality and reading Levinas, Descartes or Merleau-Ponty. A philosophy in action that has led him to set up several startups at the origin of revolutionary therapeutic innovations such as the artificial retina, cell therapy, advanced imaging techniques and optogenetics. “We created companies because we had to," he explains with astonishing evidence. “There was no industrial landscape in ophthalmology in France. In life, there is a moment when things bring about their own answers”.

Entrepreneur, director of the Vision Institute, doctor, head of department, head of a family, José-Alain Sahel also juggles two places: Paris and Pittsburgh, the city in Pennsylvania where he partly settled with his family a few years ago. There he embarked on a new project: to set up a second institute, now under construction "ten times larger than in Paris. But not necessarily ten times better," he says. His goal: to create bridges between Sorbonne University and the University of Pittsburgh to restore sight and alleviate disability. Nine transatlantic projects are already underway. "Research has no borders and should have no borders," says the man who, working in two countries, confesses that he no longer always knows where he lives.

So each day he sets aside time to read, think, listen to music, a time to think and step back. "I believe in knowledge as a remedy for many of humanity's sufferings and as a way to go beyond our limits," says the man for whom reading has become a ritual. A time of recollection stolen from the daily flow of bureaucracy, from those hours spent dealing with accounting problems, looking for loans, responding to calls for tender, and dealing with sensitivities. And to quote René Char, to remind us that "the essential is constantly threatened by the insignificant".

For him, the most important thing is also to share the light. "At the heart of it,” Serge Picaud insists “he wants to allow all those who have accompanied him since the beginning to grow with him. He has fed us intellectually and helped us find the funding to continue to develop and reach the level of the best teams in the world.”

At a time when, in preparing his succession, he is embarking on a process of effacement and giving up the responsibilities that seem secondary to him, his only requirement is to allow his colleagues to maintain their enthusiasm. "Let's not kill thirst, let's not kill hunger, let's not kill desire," he says, a man who all his life has sought to free-up creative and scientific energies for the benefit of patients.

A thirst for learning and understanding was passed on to him by one of his mentors, ophthalmology professor Alfred Brini. Hearing José-Alain Sahel describe him as "a man of extreme intellectual and personal integrity, inhabited by a demand for total honesty and attention to every detail for the patient", one cannot help but smile and see, in these words, the very reflection of the Director of the Vision Institute. The reflection of a man moved by an unfailing desire never to give up on letting a little more light shine every day on those who live in the shadows.

The Vision Institute is an international research centre entirely dedicated to research into eye diseases.
The innovative organisation of the Institut, which brings together researchers, physicians and industrialists around patients from the National Ophthemology Hospital Center called the Quinze-Vingts in Paris, enables the discovery, testing and development of new therapeutic or technological solutions to prevent eye diseases or limit their effects. Designed as a place for gathering and exchange, it allows the sharing of ideas, the emergence of new questions and the acceleration of the transfer of research results for patient care.

The Professor Sahel in 10 Dates