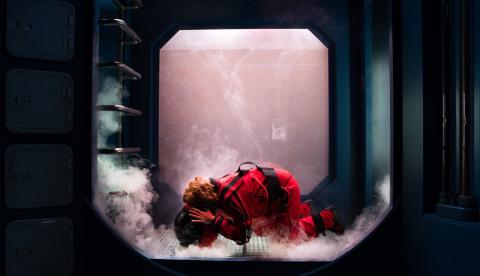 Theater, Staging Practices and Their Place in Society

Elisabeth Angel-Perez is a professor of English literature and an expert in contemporary theater, and Andrea Fabiano’s work focuses on Italian theater and opera in the seventeenth, eighteenth and nineteenth centuries at the Faculty of Arts and Humanities. 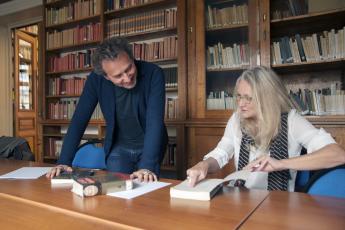 Together they run the Theater Initiative, which serves to assemble activities related to theater and live performance within the Sorbonne University Alliance.

How did the Theater Initiative get started?

Elisabeth Angel-Perez & Andrea Fabiano: Theater studies at Sorbonne University have long been represented across different disciplines related to languages and geographic regions: Italian, Spanish, English, German, French and comparative studies, for example. In 2013, we decided to unite this community within the Faculty of Arts and Humanities via a transdisciplinary program: the PRITEPS Interdisciplinary Research Program on Theater and Staging Practices. It brings together researchers working on theater, opera and the performing arts, with the goal of sparking fruitful conversations between different fields.
This initiative, which currently includes three doctoral schools, seven teams and two mixed research units, is something we hope to open up to other faculties and members of the Sorbonne University Alliance. Such collaborative momentum will further strengthen the multidisciplinary approach of theater research.

What are the Theater Initiative’s objectives?

E.A.-P. & A.F.: The initiative promotes actions and events that encourage us to think about theater and staging practices and their place in society. It provides visibility to theater studies through the organization of conferences, exhibitions, performances and publications.
It also looks to develop and strengthen partnerships with cultural and academic institutions dedicated to the performing arts.
Finally, we hope to reinforce teaching of not only the theory and history of theater, but also of the practice of theater and the art of being a spectator.

E.A.-P. & A.F.: The work carried out by the initiative covers a range of art forms, from opera to dance, theater, performance, ethnomusicology and street theater. We are as interested in contemporary innovation in theater as we are in exploring the dramaturgies of ancient centuries.
We have chosen to articulate this research within the framework of reflections on “theater and the city,” which pivots on three themes. The first is "theater and politics," which employs theater as a tool for thinking about the world and contemporary issues. The second theme focuses on the heritage aspect of theater, in connection with cultural institutions such as the Comédie-Française and the Opéra Comique in order to research archives and the history of the performing arts. The final theme centers on the link between theater and music through opera and musicals.
Alongside this program, which includes two doctoral contracts per year, we also collaborate with already-established projects such as the Théâtre Molière Sorbonne and the Observatory of Literary Life.

E.A.-P. & A.F.: We really want to strengthen research-based education. In addition to a monthly interdisciplinary doctoral seminar on theater, we would also like to open a program dedicated to the "theater of the world," which will be taught by professors from different doctoral schools and locations.
In addition, we will continue to promote the use of theater as a tool for language learning. Workshops already exist in English, Italian, German and Serbo-Croatian. For beginners, these workshops enable them to feel uninhibited when speaking. For those who already have a good level, role-play and theater techniques help them to sharpen their expression and linguistic instincts.
With the initiative, we hope to attract science and medical students to these seminars and workshops.

What are the initiative’s implications for society?

E.A.-P. & A.F. : In our desire to further open up the university to society, we will continue to develop collaborations with Parisian institutions (Comédie Française, Théâtre de la Colline, Théâtre de la Ville, and others), but also with regional and international groups.
Our goal is not simply to educate future theater experts, but also to develop informed spectators whose critical analysis of a play is not limited to its emotional impact alone. To do this, we will, in partnership with the cultural services of Sorbonne University, schedule outings to these partner institutions, which will be open to students from all three faculties.

These kinds of activities already exist within the Faculty of Arts and Humanities, which for several years has offered students the opportunity to perform in exchange for writing a short humorous or satirical piece. A group of PhD students has also set up a critical writing project open to students at Sorbonne University.
In the interest of civic education, we also hope to strengthen our links to secondary education by offering high school students the opportunity to attend the end-of-year shows of our theater workshops.