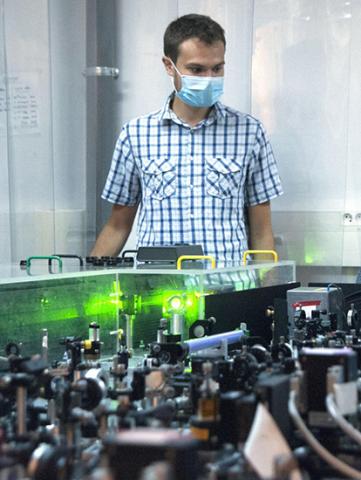 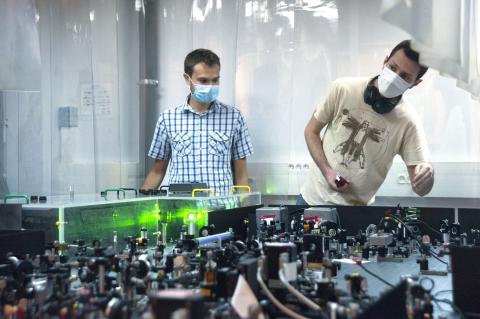 "Quantum technologies are a research priority in France" 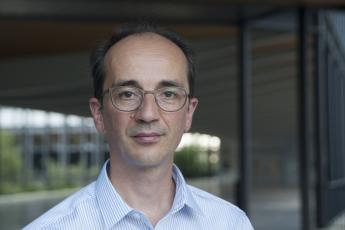 This Thursday, September 10, was the inauguration of the Sorbonne University Quantum Information Center (QICS). With his co-director, the quantum information researcher Frédéric Grosshans, Nicolas Treps presents this unique institute in France, at the crossroads of physics, computer science, mathematics, the humanities and social sciences.

What does the term “quantum information” cover?

Nicolas Treps : From the beginning of the 20th century, quantum physics has governed the organization of the infinitely small (such as atoms and photons) according to laws that are very different from those of our everyday world. For the past thirty years, scientists have used these laws to develop new technologies to perform operations that could not be done using classical physics.

Created in the 1980s, quantum information corresponds to the application of these laws in the field of communications, computation and simulation. It includes cryptography, that is, the encoding of information to make it secret and confidential.

How did the quantum information center come about?

N. T. : In recent years, quantum technologies have become an industrial issue. A race for research, innovation and talent has started at the international level. The European Union is already funding a lot of work in this area. An area that is one of the priorities for technological research in France.

In this context, LIP6 (the computer science laboratory at Sorbonne University), and  LKB (Kastler Brossel laboratory) to which I belong, began collaborating in 2016 to bring together computing and physics to quantum information. Supported by Sorbonne University and the Faculty of Sciences and Engineering, the QICS was created last January, officially bringing together physicists and computer scientists.

What are its objectives?

N. T. : Unlike other quantum centers in France, our specificity is to focus on quantum information and not on quantum technologies in general. The QICS aims to intensify the interactions between experimental and theoretical research and engineering, while exploring the societal implications of this new way of processing information. It is also about increasing educational efforts in this area, raising awareness among our partners and working with industry within innovation ecosystems.

We are fortunate to have a very active and high-level community within the Sorbonne University Alliance. It is now necessary to engage these different quantum information players in a dialogue with one another and promote collaborative work through workshops, conferences and summer schools. More broadly, the QICS is a tool available to the staff of the Sorbonne University Alliance. If a lab needs to understand what quantum information can do for it, we will be the point of entry. This center will be a success when the various members of our community have taken possession of it, put it to use it and brought it to life.

The QICS also aims to provide better national and international visibility in the field of quantum information research.

Multidisciplinarity is at the heart of the institutes. How does it seen on a daily basis?

N. T. : Beyond LKB and LIP6, the QICS relies on all the strength of the University’s and the Sorbonne Alliance’s interest in quantum information. It brings together a large community ranging from computer science to physics, including mathematics and the humanities. It includes, for example, the Costech laboratory of the Compiègne University of Technology, which is interested, from a philosophical point of view, in the epistemological and social issues associated with this new processing of information.

Due to this multidisciplinary approach, we want to make the QICS a place of reflection on what quantum technologies are, in order to be able to answer the societal questions that our leaders may ask themselves.

In addition, we will participate in the establishment of multidisciplinary collaborations by helping project leaders to find partners within our community. We will respond, on behalf of the center, to Sorbonne University's Emergence calls as well as to ambitious national and international calls.

What are the challenges of the QICS in terms of education?

N. T. : Currently, few people have dual skills in computer science and quantum physics. There is a real teaching issue in this area. An education that must be considered at all levels of the University and in connection with the socioeconomic world because many large companies wish to be educated in this subject.

First, we will identify the already existing courses related to the theme, then create options approved by the center to help students become oriented in this direction. We are also going to ensure that doctoral students from Sorbonne University who work on these themes can meet through common training courses or pre-doctoral schools.

Ultimately, we hope to create a coherent and specific educational program ranging from undergraduate studies to doctoral studies, including continuing education.

What impact can his research have on society?

N. T. : Two major themes are at the heart of our research: quantum computing and simulation; and communications. In these two areas, there are both needs for research into “hardware” to develop efficient physical supports, and needs to develop software making it possible to operate these systems.

Perhaps one of the most publicized applications is that of the quantum computer. While we are still a long way from creating a "mainstream" computer, it is possible that, within a decade, there will be quantum machines capable of performing specific operations. They could be used for research and by large companies, especially in finance.

Other quantum technologies will have a direct impact on society, such as quantum simulators that can predict the molecular properties of synthetic materials. Regarding communications, cryptography solutions already exist. The startup Cryptonext, co-founded by a researcher from Sorbonne University, already offers devices resistant to post-quantum computing capacities.

While these applications are still difficult for the general public to understand, large groups are already interested in improving their processes, strengthening their security or increasing their computing capacity. Some have contacted us in this regard. In addition, many startups are developing in this field. We have already identified five from the laboratories of the Alliance Sorbonne University.