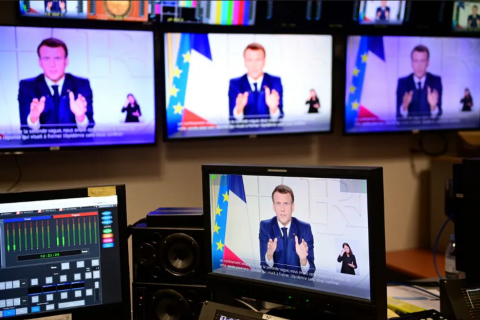 One Year of Crisis Communication in France

A major element of the evolution of political forms since Antiquity, the history of political communication finds itself implicated today in the complex relationship between politics, media and the public. The combined effect of digital innovation and the crisis of confidence that is sweeping societies the world over means that, for a democratic executive branch such as France, there is an important challenge of building a voice that lasts.

The multiple crises peppering Emmanuel Macron's term in office feed into the verticality so characteristic of the Vᵉ Republic. This trait becomes all the more unwelcome as the process of presidential disillusionment among the public grows more worrisome with each passing term.

Since February 2020, the Covid-19 pandemic has mostly compelled our leaders to engage in a sort of staging actions. As it stands in May 2021, the challenge for the executive branch’s communication has been twofold: there is the challenge of making people accept restrictive measures, and the emerging battle around political credibility. More than ever, legitimacy, authority and conflict are intertwined.

The characteristics of the health crisis largely exonerate our governments in great difficulty, but the essential cognitive pillar of democracy—trust—must be based on the consistency and coherence and of the words of those in power. So what can be said about the French executive's crisis communication over the past year?

To answer this question, we first need to examine two important factors: pedagogy and acceptability. Firstly, our leaders need to provide pedagogical information on the objective reasons that justify the decisions they have made (e.g. to avoid saturation of intensive care services) during this crisis. Secondly, they must ensure, through their communication, that their measures are acceptable over time.

These two elements imposed on the executive branch require resolution, through consultation, the tension between efficiency and consensus that is inherent in this type of decision-making process, which involves both politics and science. They also require the President of the Republic to keep his promises. Since February 2020, there have been two successive styles at Matignon*: an often pragmatic accountability from Édouard Philippe, and a more anxiety-provoking and guilt-inducing line with Jean Castex.

At the Élysée, there has been one dominant communication style, which pivots on theatricality and an exaggerated emphasis on the president's agility. Ultimately, the crisis communication from the French executive has compromised its performance. Two interdependent reasons can explain this.

Over the past year, the entire executive branch has engaged in a rhetoric full of confusing figures of speech that clumsily express both uncertainty and power. Here, of course, the Churchillian war metaphor, the president's anaphora and psalmodies have stood out.

Macron’s speeches have been full of paradoxes, such as his call to French citizens to mobilize for war... by being confined, as well as promoting wishful thinking, as he did on July 14, 2020 when he spoke of success in containing the virus and suggested the country had regained an almost normal life.

Similarly, the oscillations of the president’s actions between vertical and horizontal proximity appeared as early as March 2020: official speeches, tweets in support of caregivers and repeated trips. This battle between a lighthearted relatability and a staunch, top-down presidential ethos reached its climax between late February and late March 2021, when the president joked with youtubers McFly and Carlito right before imposing a new lockdown on the entire country.

The executive’s failed communication surrounding masks, tests and vaccines have been heavily publicized over the past year.
On May 18, 2020, BFM broadcasted a report about the crisis, titled ‘At the Heart of the Elysée,’ which included a segment that saw the president fall into sophistry when questioned about the lack of masks. The eventual questioning of Jérôme Salomon by the Senate seven months later was an embarrassing political and media event.
On December 29, 2020, the Minister of Health said that he "assumed" that the vaccination process was slow because it provided more precaution. At the same time, the President of the Republic leaked to the media that he felt angry about the slow rollout, even though he himself had decided on the Eurocentric vaccination strategy.

Certainly, thanks to the health crisis, the permanent flow of the new socio-economy of the media challenges our leaders as never before. Nevertheless, because it causes a dysfunctional polyphony, the theatricality of this crisis communication continues to nourish an informational cloud.

Dysfunctional polyphony within the executive branch

It so happens that one of the virtues of the two-headed executive branch of the Fifth Republic is that it can be modulated according to two complementary registers of communication: it is the Élysée who embodies and arbitrates, and Matignon who explains and executes.
In the management of the pandemic, however, this model, which can be described as "Gaullian,” gave way to a haphazard crisis communication plan that revealed the limits of the logocratic dimension (governing by words) of the presidential institution.

The interminable sequence around the hypothesis of reconfinement, which stretched from the end of January to Wednesday, March 31, 2021, has once again exposed this. And the cause is clear: "to govern is to appear" as Jean-Marie Cotteret has noted, and politics is a "spectacle in itself" according to Georges Balandier.
On the executive stage, speeches, gestures and textual or iconic productions are deployed in turn to serve as supports of ensuring the visibility of communication and, if possible, its consistency in the public space.

The content of a political speech, its social context of enunciation, and the media channel in which it is registered determine its various receptions. This is why, since February 2020, the executive branch’s media plan has often appeared erratic.
For example, on February 2nd, Macron appeared in an unexpected interview with TF1, but rather than delivering any decisive message, simply blurred the governmental word. Similarly, on the evening of March 16th, Jean Castex appeared on BFM on the eve of a Defense Council where everything was to be decided. This lack of a functional division of roles between the Élysée and Matignon plagued the first two months of the crisis in 2020.

But, as Guillaume Tabard wrote in Le Figaro at the time, it was above all the presidential word that had been "more repetitive than performative.”
On Monday, April 13, 2020, Macron made his fourth televised address in a month, a record under the Fifth Republic. On the other hand, the technical and rigorous governmental communication orchestrated by Édouard Philippe had gradually drawn a "fixed point" in the management of the crisis. From April onwards, and whatever the contexts of enunciation (press conference, parliament, television news...), the approaches, processes and meanings pivoted around humility, the principle of reality and responsibility.

An example from Matignon on April 2nd, 2020:
"We are in a moment where we must be humble. There is no shame in saying ‘we don't know’ when we don't know.” Similarly, in a press conference on April 19: "We are going to have to learn to live with the virus"; before deputies on April 28: "A little too much carelessness and it's the epidemic all over again. A little too much caution and the whole country sinks.”

What conclusions can be made?

Any major crisis typically tends to unite the French around their president. The major challenge this time around has been to protect presidential efficacy from the afflictions caused by the indefinite duration of the pandemic. As Emmanuel Macron himself acknowledged on March 15 in Montauban, "The master of time is the virus."

The President of the Republic must, more than ever, uphold public opinion, while also containing the pandemic. This is the reason why the longer the pandemic continues, the less he will allow himself two presidential postures. However, concerns over his repeated difficulty in naming anything that is even slightly offensive to his audience ("borders", "confinement", "vaccine passport"...) are warranted.

Finally, it should be noted that this crisis communication must also support, for Emmanuel Macron, the persuasive shaping of a new political project for 2022. Unless, as was the case for François Hollande and the "inversion of the unemployment curve,” the vaccine campaign does not meet the end of the tunnel in time.

*Hôtel de Matignon: The official residence of the French Prime Minister
Isabelle Le Breton-Falézan, Senior Lecturer, Sorbonne University.
This article is republished from The Conversation under a Creative Commons license. Read the original article (in French.)