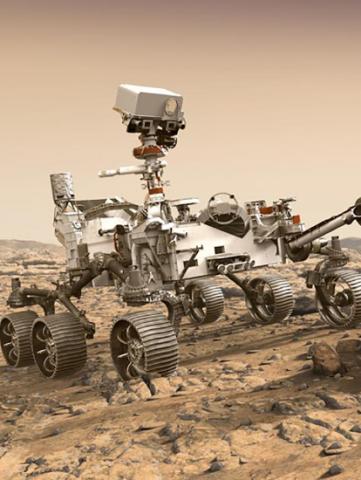 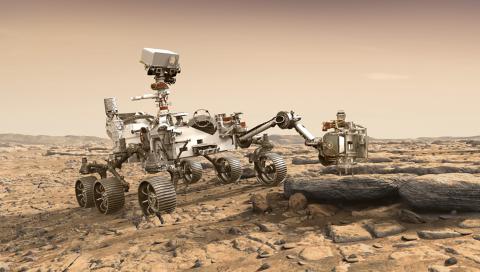 Follow along live as the Perseverance rover lands on Mars, thanks to the SuperCam instrument on board which was co-developed by three research laboratories under the supervision of Sorbonne University.

On Thursday, February 18, 2021, a little before 10:00 pm, the Perseverance rover will descend on Mars at more than 21,000 km/h. In just a few minutes, it will have to land on its surface at less than 3 km/h in the Jezero crater, a 45-kilometer diameter impact basin that a river filled with liquid water 3.5 billion years ago. The site may contain preserved fossil evidence of a life form.

Over the next 22 months, Perseverance, NASA's latest astromobile (or "rover"), will explore this ancient region of Mars to determine the chemical and mineralogical composition of the planet's soils and rocks. It will also examine the dynamics of the current Martian atmosphere in order to clarify the geological history of this region, characterize its past habitability and search for fossil traces of life. Beyond the in situ exploration, Perseverance is designed to collect samples that will be recovered and brought back to Earth by two joint missions involving the United States and Europe over the next ten years (MSR program, Mars Sample Return). Perseverance's mission is also to prepare the human exploration of Mars.

NASA is relying on Caltech/JPL for the development of the Mars 2020 mission. The SuperCam is jointly developed by LANL (Los Alamos National Laboratory, USA) and a consortium of French laboratories and universities, with a contribution from the University of Valladolid (Spain). The Perseverance rover carries seven instruments, a sample collection and conditioning system and the small Ingenuity "helicopter" drone. France is co-responsible for the SuperCam instrument, a much improved version of the ChemCam instrument that has been operating on board the Curiosity rover on Mars since August 2012. The CNES* is responsible, vis-à-vis NASA, for the French contribution to SuperCam. The CNRS and several institutions, including Sorbonne University, have contributed to the construction of this instrument, which will be operated alternately from LANL and the scientific operations center installed at the CNES in Toulouse (FOCSE Mars 2020).

The critical landing phase, described as the "7 minutes of terror" by the space community, is fully programmed and no human intervention is possible © CNES 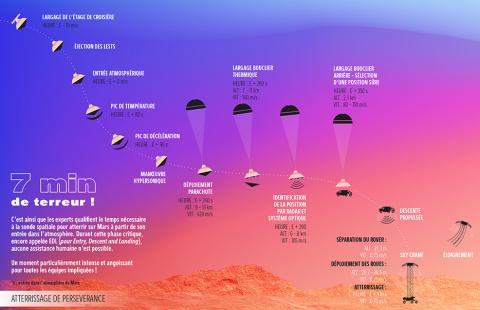 SuperCam: the "Swiss Army Knife" of the mission's scientists

SuperCam uses five different analysis techniques: one atomic composition measurement, two molecular measurements (the way atoms are bound together and the arrangement of molecules), an imager to photograph the targets that are being analyzed, and finally, the very first scientific microphone to reach the surface of Mars. Thus equipped, SuperCam will remotely study the chemistry and mineralogy of Mars as well as the composition of its atmosphere. SuperCam has been built in the framework of a scientific collaboration between LANL and the Institute for Research in Astrophysics and Planetology (co-supervised by the CNRS/CNES/University Toulouse III Paul Sabatier), with the support of the teams of the Laboratory of Atmospheres, Space Observations (Latmos, member of IPSL - UVSQ, Sorbonne University, CNRS) and the Laboratory of Space Studies and Instrumentation in Astrophysics (Lesia - Observatoire de Paris-PSL, Sorbonne University, University of Paris, CNRS).

These researchers and those of the Institute of Mineralogy, Physics of Materials and Cosmochemistry (IMPMC - Sorbonne University, CNRS, MNHN) are part of the Franco-Hispanic-American team operating the SuperCam instrument. This instrument will enable the remote analysis of rocks, soils and atmosphere of Mars thanks to different spectroscopies (LIBS, Raman and visible-infrared reflectance), a color imager and a microphone. The engineers and technicians of these laboratories made an essential contribution to the design, realization and testing of the SuperCam instrument.

Combining their expertise in spectroscopy, atmospheric dynamics, mineralogy and astrobiology, the researchers involved will take part in the operations by contributing to the definition and programming of the tasks sent daily to the rover as well as the analysis and interpretation of the data collected in return.

Live French-language broadcast organized on the evening of the landing by CNES in partnership with CNRS on Thursday, February 18, 2021. Other information is available on the English version of the site.

Watch on the CNES site in French or English.