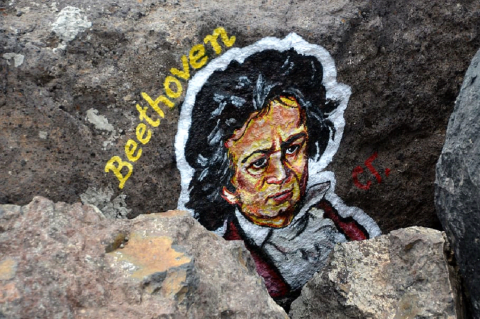 On the occasion of Ludwig van Beethoven's 250th birthday, the University Library at Clignancourt offers a selection of resources to discover or rediscover this great musician.

Beethoven was born on December 17, 1770 in Bonn (Germany). This year we celebrate the 250th anniversary of his birth. His father, himself a musician, taught him music at a very young age. Ludwig quickly became an outstanding pianist and composer. During his lifetime, he met other great names in music such as Haydn and Mozart, when he lived in Vienna for part of his life.

Unfortunately, from 1796 onwards, Beethoven gradually became deaf, but instead of giving up music as he had envisaged, he faced his fate and continued composing masterpieces such as his 9 Symphonies or his string quartets. Beethoven died on March 26, 1827 in Vienna. He is considered one of the greatest composers in history.

Consult the online dossier of the exhibition "Ludwig van, the Beethoven myth" dedicated to the artist by the Musée de la Musique (2016-2017).

On the occasion of Beethoven's birthday, Arte has gathered a series of videos on the free access platform arte.tv: find multiple concerts and presentations of his work online.

English biography of Beethoven in the Grove Music Online

The Music Online database will give you access to nearly 350 scores online.

Beethoven inspired many filmmakers including, Stanley Kubrick: Höyng, Peter. "Ambiguities of Violence in Beethoven's Ninth through the Eyes of Stanley Kubrick's 'A Clockwork Orange.'" vol. 84, no. 2, 2011, pp. 159-176.