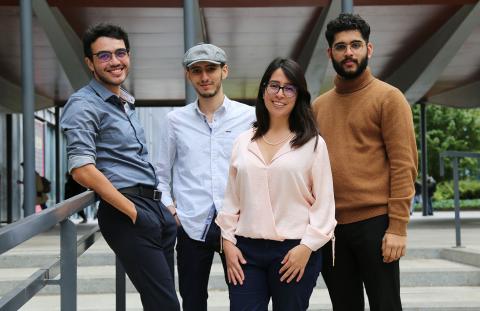 The ACES association (student association of competitive entrepreneurial computing of Sorbonne University) recently participated in a hackathon organized by NASA. They won the French competition and are now preparing for competition at the international level.

The NASA International Space Apps Challenge is an international hackathon for coders, scientists, designers and technologists from cities all over the world.
The challenge is designed to introduce participants to NASA's open data. Each year, teams use this information to solve problems and to share and apply the resulting knowledge in a collaborative and creative environment

One hundred and sixteen teams of six participated in the national competition. The topic proposed for the 2021 edition dealt with the increasing amount of debris orbiting the Earth and its impact in space. The challenge was to develop an open-source geospatial application that could display and locate all known debris orbiting the Earth in real time.
ACES, a student association from Sorbonne University’s Faculty of Science and Engineering, brought their talents to this challenge. They proposed an innovative solution in the form of an interactive, real-time 3D representation of our planet and all the debris that surrounds it with a parameterized search engine. It enables the user to see the debris on the map and choose a category (such as satellites of special interest, meteorological and earth resource satellites or scientific satellites) as well as all the information concerning it (ID, name, altitude, latitude, longitude). ACES worked with Python to retrieve the data, JavaScript to use NASA's WorldWind (geo-spatial map), Flask, and tools to ensure their data was secure.

Further Challenges
The student association was particularly interested in AI and ML (Machine Learning), and had thus gathered a whole team of AI/Cloud Masters students preparing to build an ML application. However, the challenge didn’t end up being centered around this expertise, so the team had to reorganize itself and quickly acquire a number of new skills during the competition, in addition to the knowledge related to Space (such as the calculation of debris trajectories, TLE epochs, and space library propagators in python). The student team worked on both the network/cloud aspect of website hosting, on the front-end and back-end to calculate the coordinates and trajectory of the satellites, and to display them correctly. This impressive ability to adapt and reorganize enabled ACES to successfully complete the project.

Coming out ahead of the other teams, ACES optimized their remaining time to think about how to improve the product by adding, in addition to the challenge’s requirements, the option to navigate through time and see debris locations in the future to predict satellite collisions through ML.

ACES is now in the running for the international competition, which will run for 48 hours. The association will compete against 4534 teams of all nationalities, 360 of which will be selected for "Global Judging" by an executive committee of NASA, ESA, JAXA, CNES, CSA and a group of expert agencies.

Watch the presentation video and the association's webite (in French.)