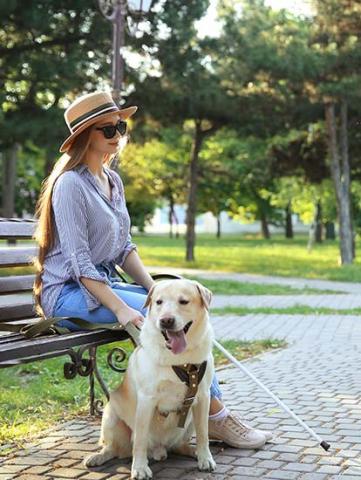 A Closer Look at Optogenetics: Bringing Hope to People with Vision Impairment

Researchers and clinicians from the Vision Institute, the Quinze-Vingts Hospital center, the Basel Institute of Ophthalmology and the start-up GenSight Biologics have achieved a world first: partially restoring the sight of a blind man thanks to an innovative therapy called optogenetics. Read the article announcing the breakthrough, and continue reading below for more insight.

This technique, which has already been used for some 20 years in neuroscience, is now being used successfully in humans for the first time, under the impetus of José-Alain Sahel, founder of the Vision Institute.

The first patient to benefit from this therapeutic trial, published on May 24, 2021 in Nature Medicine, is a man suffering from a degenerative genetic disease: retinopathy pigmentosa. As for nearly one person out of 3500, this pathology progressively destroyed the photoreceptors of his retina until he became blind. Photoreceptors are the only cells in the eye that can be activated by light and are responsible for translating light stimuli into visual information. Without them, it would be impossible for us to see the world around us.

The optogenetic therapy developed for this trial consists in compensating for the disappearance of these photoreceptors by making other cells of the retina sensitive to light: the ganglion cells. The researchers used a photosensitive algal protein called opsin. “Using an inactivated virus, we introduced into the ganglion cells the genetic code that carries the instructions for making this protein," explains Deniz Dalkara, a molecular biologist at the Vision Institute, who has been working for more than ten years on the development of this process. "I developed this viral vector during my postdoc at Berkeley before implementing it, at the Vision Institute, in several animal models up to the human patient. In concrete terms, we used a virus that is not pathogenic for humans (the adeno-associated virus) that we modified so that it specifically infects the retina. Then we introduced all the genetic information necessary for the correct expression of the protein so that it could be read and translated efficiently by the ganglion cells."

Thanks to this new genetic heritage, the ganglion cells will then be able to produce the algal opsin. But unlike our natural photoreceptors, this protein is not sensitive enough to produce an image from ordinary light. It detects amber light at high intensities. That's why GenSight Biologics has developed augmented reality glasses, which record visual information from a scene before turning it into monochrome images. These images are then projected onto the patient's retina at high intensity. 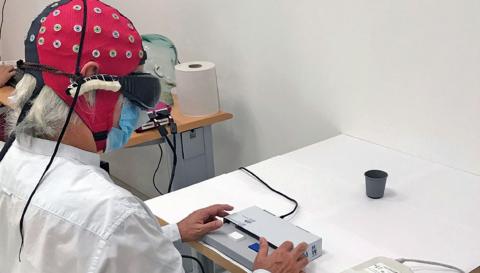 "With this gene therapy, which remains at the cellular level, we can hope to obtain a resolution closer to normal vision than with other strategies, such as artificial retina," adds Isabelle Audo, professor of ophthalmology at Sorbonne University, researcher at the Vision Institute and principal investigator of this study. A hope shared by Gregory Gauvain, lecturer in neuroscience at Sorbonne University, who has been in charge of the preclinical tests for this trial at the Vision Institute since 2016. "We worked on models close to humans to characterize the optogenetic activation of ganglion cells and to best estimate the dose needed to have a correct expression of the protein," explains the neuroscientist. “We also sought to define the level of light intensity sufficient to activate opsin. All this preclinical data was used by GenSight Biologics' teams to develop the glasses. They also allowed us to demonstrate the effectiveness of our strategy to move into the clinical phase. "

"Thanks to this optogenetic therapy, we have seen in our trials that we could hope to obtain a visual acuity of up to 1/10 - which corresponds to the largest letters in the visual acuity scale," Grégory Gauvain continues. “This would be revolutionary," adds Isabelle Audo, "because until now, strategies have never considered reaching this level of acuity. But this preclinical hypothesis must now be verified in practice. "

While waiting for further results, functional tests performed at the Quinze-Vingts Reference Center for Rare Diseases and at the Streetlab platform of the Vision Institute seem to confirm the researchers' expectations: seven months after the injection of the viral vector and after being trained to use the glasses, the first patient in this clinical trial acquired the ability to perceive, locate, count and touch objects of different sizes when his eye was stimulated with the glasses. The scientists also verified, via electroencephalography measurements, that when the glasses sent a signal to the retina, the visual cortex was indeed activated. “This therapy will not radically change the daily life of this patient," says Isabelle Audo. “But it will give him a contrasting monochrome vision allowing him to recognize objects on a white background or the zebra stripes of a crosswalk, for example.”

Other patients have already been included in this trial, which is primarily designed to evaluate the safety and tolerance of the treatment. Fifteen people who have lost their retinal photoreceptors are expected to participate in this multicenter study in Pittsburgh, London and Paris. Divided into three cohorts, they will receive a different dose of the viral vector. “The first patient had the lowest dose of virus," explains Isabelle Audo. “We can assume that those who will receive a higher dose will probably have more photosensitive ganglion cells and may see contrasts more accurately. If the treatment is well tolerated, future trials could be extended to patients who see movement and, eventually, to people with age-related macular degeneration.”

But researchers at the Vision Institute do not intend to stop there and are already looking into the development of new therapeutic strategies. To obtain better acuity, Deniz Dalkara is betting on restoring the activity of the photoreceptors themselves. She also hopes to develop a process that will allow patients benefiting from optogenetic therapy not to need to wear glasses. To this end, she has been working for several years on other light-sensitive proteins and has founded a start-up company for the project.

Grégory Gauvain and his team are trying to develop this same optogenetic approach - not in the retina, but directly in the visual cortex. This is a real challenge that requires first of all an understanding of how the brain interprets the world and how visual stimuli are encoded at all stages from the eye to the cortex. This will give a glimmer of hope to millions of patients with vision impairment.