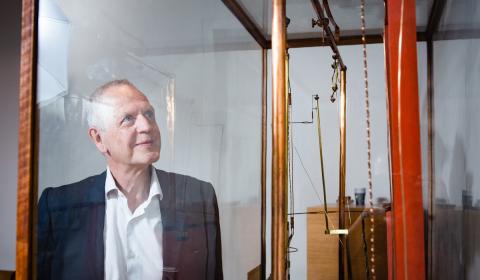 Jean Dalibard is a physicist and pioneer in the study of ultracold quantum matter.

Jean Dalibard was awarded the 2021 CNRS gold medal on June 24 for his groundbreaking work in the physics of ultra-cold quantum matter. He has greatly contributed to the emergence of quantum technologies, which are based on a deep understanding of the quantum properties of matter and their control. After a 30-year career at the CNRS, he is now a professor at the Collège de France. The CNRS gold medal will be awarded to him on December 8, 2021 at a ceremony in Paris.

Born in 1958, Jean Dalibard joined CNRS in 1982 and is a specialist in quantum physics. A member of the French Academy of Sciences since 2004, he has been a professor at the Collège de France since 2012. Within the Kastler Brossel Laboratory (CNRS/ENS-PSL/Sorbonne University/Collège de France), he has developed a unique career as an experimenter and theorist. He has been a visiting scientist at the National Institute for Standards and Technology (USA), at the Cavendish Laboratory of the University of Cambridge (UK), and has taught at several foreign universities.